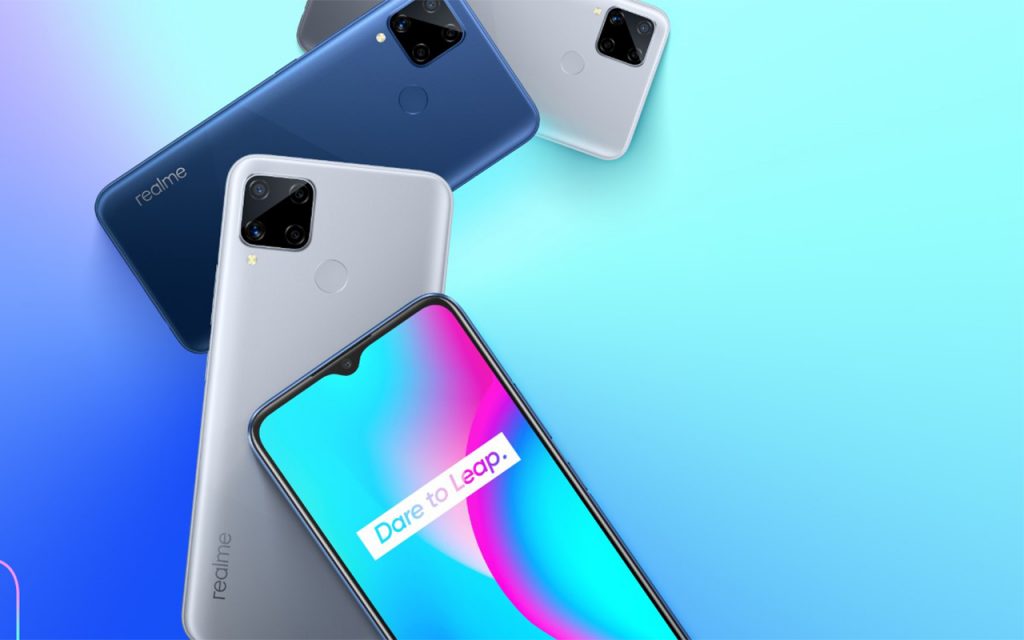 Realme had launched the Realme C11 in India last month. This month, it hyped up more upcoming affordable phones and then launched Realme launched two C-series smartphones in India. The Realme C12 and the Realme C15 are very similar in terms of features, with slight differences in the camera setups and reverse charging capabilities. Both phones use 6.5-inch screens, a gaming-grade MediaTek processor, multi-camera setups at the rear, and 6,000mAh batteries with reverse charging. The Realme C12 and the Realme C15 sport 6.5-inch IPS LCD screens with HD+ resolution, Corning Gorilla Glass protection, and waterdrop-shaped notch towards the top. The phones use polycarbonate bodies in an attractive dual-tone matte finish. Both smartphones run Android 10-based Realme UI 1.0 software and use the 12nm MediaTek Helio G35 octa-processor. The Realme C12 features 3GB RAM and 32GB storage, while the Realme C15 features 3GB/4GB RAM and 32GB/64GB storage. Both phones come with a dedicated microSD card slot.

Realme has equipped the C12 with a 5MP selfie camera and the C15 with an 8MP selfie camera. At the rear, the Realme C12 has a triple-camera setup consisting of a 13MP wide-angle camera, a 2MP macro camera, and a 2MP monochrome (black and white) camera. The Realme C15, on the other hand, has a quad-camera setup at the rear, featuring a 13MP wide-angle camera, an 8MP ultrawide camera, a 2MP monochrome camera, and a 2MP ‘retro camera.’ Both smartphones have an LED flash and can record up to Full HD (1080p) videos with a frame rate of 30fps. In terms of connectivity, the Realme C12 and the Realme C15 feature dual-SIM card slot, dual-4G LTE, dual-VoLTE, dual-VoWi-Fi, A-GPS, Wi-Fi b/g/n, Wi-Fi Direct, Bluetooth 5.0 (with aptX), FM Radio, and a microUSB port. It is unfortunate to see a microUSB port in 2020. Brands should completely shift to a USB Type-C port for all their devices.

Both smartphones come packed with a 6,000mAh battery and have the reverse charging feature to charge other devices. The C12 features 10W fast charging, while the C15 is compatible with 18W fast charging. Other features include accelerometer, ambient light sensor, fingerprint reader, gyro, and proximity sensor.

The company also launched its new wired earphones, the Realme Buds Classic, in India alongside the C12 and the C15. The new earphones cost just ₹399 and they feature a half in-ear design. The Realme Buds Classic uses 14.2mm audio drivers, an in-line HD microphone with a single button to control calls and music, and a cable strap. The earphones will be available in two colors: black and white. Buying a washing machine can be a daunting task if you see the number of models you have to choose... END_OF_DOCUMENT_TOKEN_TO_BE_REPLACED

Looking for the best high-end smartphone in India? Or maybe a foldable smartphone to flaunt in front of your friends... END_OF_DOCUMENT_TOKEN_TO_BE_REPLACED

Plans of relocating to Mumbai soon or moving in for a few months? If yes, here are 5 apps you... END_OF_DOCUMENT_TOKEN_TO_BE_REPLACED

The slimmer TVs get, the more their sound suffers because there is no longer any space for robust speakers on... END_OF_DOCUMENT_TOKEN_TO_BE_REPLACED